A Realization Over Time

I was thinking about sound the other day. Sound is fascinating and our sense of hearing doubly so. If you reduce sound to its most elemental level, it's nothing but a series of higher- or lower-pressure waves that stimulate a specific nerve in our auditory canal. But given those very basic impulses, we can discern many different sources of sound. The sound of me typing on my keyboard differs not only from the sound of my son playing the piano, but also from the sound of typing on a slightly different keyboard.

And for some reason this has always annoyed me. If you look at a visual representation of an audio file, you'll see the overall outline of the waveform, and it seems impossible that such a primitive shape could contain music with voices and instruments and beauty.

But the things that differentiate sounds are the waves, the distance between peaks and troughs. The note C is generally considered to be a series of waves that repeat 261.63 times per second. The size of those waves is the volume, the frequency of those waves is the pitch. Okay, I can understand this.

And the really cool part is that when you play a C on a violin, you also get all these other resonances: from the other strings, from the body of the violin, from the shape and features of the hall in which you are listening to the violin, and your brain uses all these things to tell you this is a violin, not a guitar, which has a totally different set of resonances, or a piano, or a flute, or a human voice.

None of this is new

I know that. But here's what finally clicked in my brain:

Hearing is time bound. You can't hear things instantly, you have to hear things over a span of time. If I hear a single burst of sound, a single peak without a trough and another peak, it conveys no meaning. We store music at 44,000Hz or more because our brains process forty-four thousand impressions per second to clearly make out all the nuances that are occurring in our music.

This is different from, say, a painting or a sculpture. I can take in a gestalt view of a visual medium almost instantly, and “get” the whole of it. But I can't listen to an entire song in one second, it has to be played out over its allotted span of time. Time is an integral part of music.

Granted, I will get more out of a painting if I spend more time looking at it. Consider Gustave Caillebotte's Paris Street; Rainy Day: 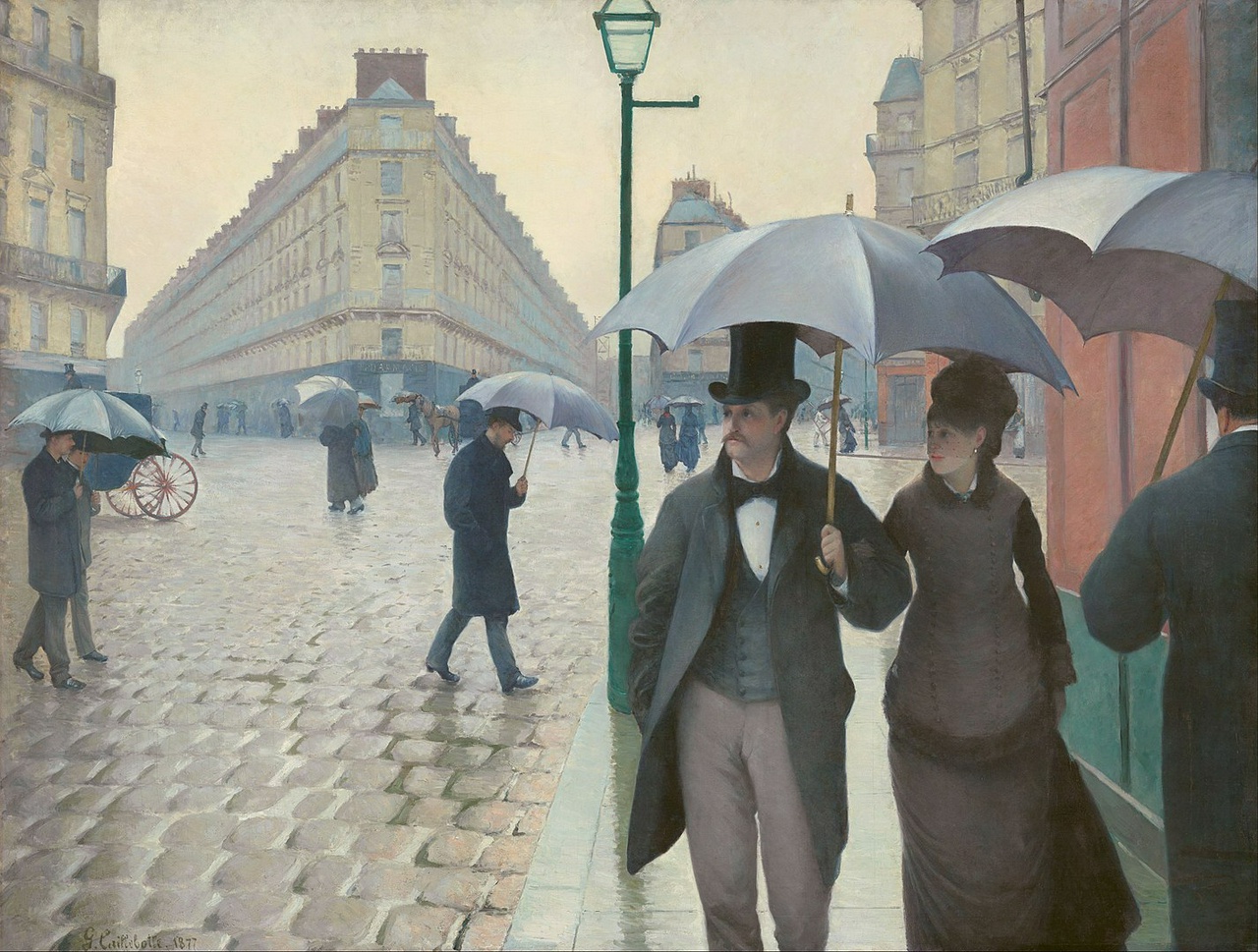 If you look at it very quickly, it's a very boring scene. Some people walking in Paris. But spend some time with this image and the feeling of it comes through. Look at the reflections of the walkers in the rain between cobblestones, sense the various moods, feel the story of the piece...

So this made me think a little deeper. If music is a sensation that occurs over time are there others? Well, of course. You can't read an entire book in a single instant, text is also experienced linearly. But writing is just a way to transmit sounds visually and durably. Technically sight is also time bound, as colors are different wavelengths, meaning we have to experience at least a few oscillations to discern those colors, but those waves are so fast that they are essentially instant.

So what visual media are time-bound? Well, drama, obviously. We say that we watch a play or a movie or a show, but we experience it over time The sound, the words, the music, they are all intertwined with the part we are “watching”. We experience the story as it unfolds, in time, taking up its set span of that dimension.

So... stories take time, then? I can look at a sculpture or a painting instantly, but getting the story of the piece takes time, just like music or drama take time.

But they don't always have stories, per se, do they? A poem can be about a feeling without a plot, so it's not just stories, is it? It's something deeper, something more basic...

It takes time to feel things. Human experience is rooted in the fourth dimension, how could it be otherwise? To fully experience anything of emotional significance, we need to allocate time to that experience.

And that was the realization I came to, over time.